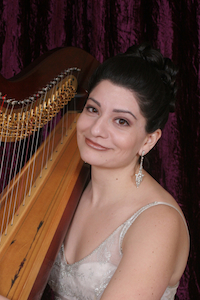 The concert is co-sponsored by the “Stanislaus A. Blejwas Endowed Chair in Polish and Polish American Studies at CCSU, and presented in partnership with Mr. Grzegorz Dąbrowski.

JILL MAURER-DAVIS holds B.M. and M.M. degrees in Flute from the New England Conservatory of Music in Boston and a diploma from the

Orff Institute-Mozarteum in Salzburg, Austria. Her principal teachers have included Louis Moyse, Thomas Nyfenger, James Galway, James Pappoutsakis, and Lois Schaefer. She retired from The United States Coast Guard Band and the USCG Woodwind Quintet in which she had often performed at the White House for President and Mrs. Clinton, heads of state, the 50th NATO celebration, the Joint Chiefs of Staff, members of the Cabinet, and members of Congress. The Quintet has also represented the United States in performances in the former Soviet Union and in England. As a flute and piccolo soloist, Ms. Maurer-Davis has been featured on National Public Radio and Australia Broadcasting Co. as well as on NHK in Japan. She has been featured on “Performance Today” broadcasts on NPR. On PBS, she has appeared on Exxon’s “Live at Wolf Trap” series and with Jean-Pierre Rampal on New York’s WNET. Ms. Maurer-Davis was invited by the Boston Symphony Orchestra to perform in recital at Symphony Hall for a special orchestra event. Also, she has appeared as flute and piccolo soloist at the National Flute Association convention. She has performed with the Boston Pops, Worcester and Hartford Symphonies, Connecticut Opera, New Haven Symphony, Orchestra New England, Northeast Pennsylvania Philharmonic, CT Virtuosi, CT Lyric Opera and toured with tenor, Andrea Bocelli. Ms. Maurer-Davis is currently on the faculty of Central Connecticut State University and the Thames Valley Music School.

To read the interview with Prof. Davis by Larry Kellum click here >>>

MEGAN SESMA has performed in venues that range from Tchaikovsky Hall in Moscow Russia, the Hollywood Bowl in Los Angeles, Carnegie Hall and numerous concert halls in South America. Her experience has placed her under the batons of some great conductors ranging from Neeme Jarvi and Yuri Temirkanov to John Williams and Jerry Goldsmith. Ms. Sesma has also shared the stage with such legends of contemporary and popular music as Quincy Jones, Herbie Hancock, Diana Krall and Dianne Reeves. Ms. Sesma holds a Bachelor in music from the Eastman School of Music as well as a Bachelor of Arts in Economics from the University of Rochester and a Masters Degree in harp performance from New York University. Ms. Sesma is adjunct professor of harp at the University of Connecticut in Storrs, CT and Connecticut College in New London, CT and harp instructor at Wesleyan University in Middletown, CT and is President emeritus of the Shoreline Chapter of the American Harp Society. Ms. Sesma is currently the 1st enlisted principal harpist with the United States Coast Guard Band, which in February 2003 added a harp position for the first time since its creation in 1925. In addition to her position as principal harpist with the USCG she substitutes with the New Haven Symphony, Rhode Island Philharmonic, Hartford Symphony, Bridgeport and other symphonies. Ms. Sesma performed at the World Harp Congress in July 2011 with the Eastman Harp Quartet and toured Taiwan performing concerts with the Coast Guard Band. December 2010 included the performance of Harp Christmas, a harp concerto with concert band. Recent performances include a July 2005 performance at the World Harp Congress in Dublin, Ireland. March 2006 included the concerto performance of Claude Debussy’s Danse sacrée et danse profane in Merkin Hall and the world premiere of Hampson Sisler’s new composition for soprano, harp and orchestra, Diurnal Night. In 2004 she was the soloist on the US Coast Guard Band Midwest Summer Tour performing the Ginastera Harp Concerto. Other recent performances include a solo recital in Mexico City, and Antigua Guatemala.

GILBERT GIGLIOTTI is a professor of early American literature and Latin at Central Connecticut State University. Along with academic articles on a variety of authors from the 16th, 17th and 18th Centuries, he edited the anthologies Ava Gardner: Touches of Venus and Sinatra: But Buddy I’m a Kind of Poem (Entasis Press, 2010 and 2008) and authored A Storied Singer: Frank Sinatra as Literary Conceit (Greenwood Press, 2002). He also hosts the weekly Sinatra radio program, “Frank, Gil, and Friends,” on Tuesday mornings (8-10 AM) on WFCS 107.7 FM New Britain/Hartford.