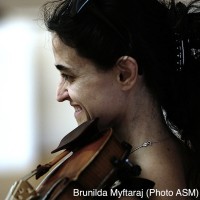 Albanian American violinist Brunilda Myftaraj has drawn enthusiastic accolades from audiences as well as critical acclaim for her masterful musicianship in her native Albania, as well as Italy, Greece, France, Marocco, Austria, Switzerland, Poland, Israel and in the United States. She has been praised by the New London Day critic as an “especially fine and beautiful player”. She graduated with the Highest Honors from the renowned Conservatory of Fine Arts in Tirana, and has studied throughout Europe and the United States. Her teachers have included some of world’s finest, Proletare Skenderi, Piero Faulli , Alberto Lissy, Phil Setzer, Eugene Drucker, Rafael Druian and Renato Bonacini. She was featured as soloist with the Hartford Symphony Orchestra and the Connecticut Virtuosi Chamber Orchestra as well as other orchestras. She is an active recitalist and some of the series included Piano and Friends Chamber Music in Tucson Arizona, Mostly Mozart in Napa Valley, the Schubert Club in Minneapolis Westchester chamber music series, Music & friends of Manchester and many more. Aside from been featured on radio stations in NY, CT and MA, she also received first prize in the Van Rooy competition, Emerson Quartet competition, Trinity auditions in NY and was semifinalist and participant in prestigious competitions such as the Young Artist Guild in NY, Indianapolis International Violin Competition and the Lipizer Competition in Gorizia, Italy. Ms. Myftaraj has produced several recordings with her former Elektra Ensemble and her solo Albums, “Naked violin” and “The American Pie”. Both her latest Albums received highest reviews from the leading American classical magazine Fanfair magazine. “The American Pie” includes most of the greatest hits of American composers such as Gershwin, An American in Paris and Bernstein West side story. To further mark Bernstein centennial, Brunilda is scheduled to perform Serenade, after “Plato’s symposium” by L. Bernstein June 1 & 2, 2018 with the CT Virtuosi chamber orchestra in New Britain and Hartford. Currently Ms. Myftaraj serves as concertmaster for CT Virtuosi Chamber Orchestra, CT Lyric Opera and Greve Opera Academy and Music Festival in Italy. She is also the director of the Virtuosi Music Academy and the CT Virtuosi Summer Music Institute & Festival in Farmington where she also teaches violin.