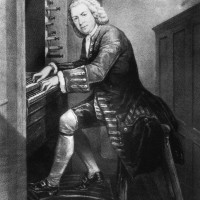 The Connecticut Virtuosi Chamber Orchestra celebrates the music of Johann Sebastian Bach with concerts in New Britain and Hartford next week featuring three of his works.

Italian harpsichordist Giacomo Benedetti will be the featured soloist in a performance of Bach’s ‘Harpsichord Concerto No.1 in D Minor, BWV 1052.’ Benedetti has previously served as a faculty member at the Virtuosi’s summer Opera Academy and Music Festival in Greve-in-Chianti, Italy. “We did some concerts in Greve with the harpsichord, and (Virtuosi artistic director Adrian Sylveen) was happy with the music made together. It bore a friendship between us, so we started working and making music together,” Benedetti says.

“The music is beautiful, full of pathos and rhetoric, aesthetic symbols of the Baroque period” Benedetti says of the Harpsichord Concerto. Although the harpsichord was made out-of-date by the rise of the piano as the primary keyboard instrument in the latter part of the 18th century, the two instruments are very different and not at all substitutes for each other. “A thorough study of unique aesthetic and formal rules are associated with the harpsichord. Its mechanism is different from that of the piano, as the ‘softs’ and ‘louds’ on the harpsichord are obtained in a completely different way.”

Bach is often quoted as saying that “the aim and final end of all music should be none other than the glory of God and the refreshment of the soul,” and his Cantata BWV 32 ‘Liebster Jesu, mein Verlangen,’ also a featured highlight of this concert, is a testament to that. It casts a bass soloist in the role Jesus and a soprano soloist in the role of an allegorical searching Soul, and has a very season-appropriate theme of the time in the Bible before Christ’s resurrection.

“When you think of the text, it’s before Easter,” says bass soloist Christian Kotsis. “It’s not all positive, because Jesus is about to die for us. You can hear it in the music, but also you can hear that He will survive for us. It’s the story from the Bible, it’s a time of suffering and pain, but you know He will arise. The music is pretty emotional … and even more touching if you believe in God. And I think the audience will be touched when the artists, the singers, really mean what they sing. That’s very important—it’s not just a melody, no, it’s a true story. And you have to believe in the story, and what you sing. If not, the audience won’t believe you! It will touch their hearts if you really sing it like a prayer, because it is a prayer.”

Kotsis, who is originally from Vienna, has previously participated in the Greve Opera Academy and Music Festival, having been cast in the role of Masetto from Mozart’s opera ‘Don Giovanni.’ “It was a pleasure to work with [the Virtuosi in Greve],” he says. “It felt very comfortable and easy-going, because everyone was really passionate.” He says this upcoming performance opportunity came about as a result of the Baroque quality of his voice: “I think [Adrian Sylveen and I] just feel the same way about Bach and old music and Baroque. It’s a question about the feeling of the music. Some people like Wagner, others like Puccini, but I grew up with old music, I listened to a lot of old music when I was a child. Maybe this is the reason why I have a special feeling for it, and Adrian too.”

The role of the searching Soul will be performed by Greek Cypriot Australian soprano Christiana Aloneftis, who will be making her United States concert debut at this concert. “It will be my first time in the U.S., so I’m very excited about that! I’ve never been to America, and this opportunity has given me the impetus and the inspiration to perhaps one day pursue opportunities that are given to me or offered to me in America. It’s opened many doors, I would say.”

Like Kotsis, Aloneftis has also previously participated as a Young Artist in the Virtuosi’s Greve Opera Academy, performing the role of Musetta in Puccini’s opera ‘La Bohéme.’ “For me [the Virtuosi and CLO] are very important because they gave me sort of a first break into operatic repertoire, because I’ve sung little roles before, but singing the role of Musetta was really a dream come true. And I’m very excited to be making music again with people who have such a fond place in my heart.”

Aloneftis sees similar themes as Kotsis in the spiritual meaning of the cantata’s text: “It’s perfect for the lead-up now to Easter celebrations coming up, so I think that’s why it’s been particularly chosen. In Christianity, in this period of time, it’s Lent. It calls for fasting, it calls for repentance, it calls for the need to look within oneself, and to see how one can better oneself I think. So the idea of needing Jesus, or needing God, or needing some sort of spirituality, is quite pertinent in this cantata.”

Local audiences at these upcoming concerts will be treated to an evening of wonderful music by one of the greatest composers of all time. But beyond that, the concerts demonstrate the Virtuosi’s commitment to providing performance opportunities for young performers, whether it be the local college students of the University Singers having an opportunity to perform with professionals at a professional concert, or young professionals like Kostis and Aloneftis, who have participated in the Virtuosi’s international music institute and now will perform as part of the Virtuosi’s concert season. These concerts truly represent the wonderful things the CT Virtuosi Orchestra does for the musical community and has done for all of its 20 successful years, both locally in Connecticut, and across the world.