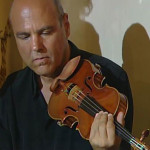 Rinaldi, who has since served as a faculty member of the Greve Opera Academy and Music Festival he helped create, has also previously performed as a guest artist with the CT Virtuosi Orchestra. “Last September, I was invited to play with the Connecticut Virtuosi Chamber Orchestra and with Adrian Sylveen. We performed the Mozart Sinfonia Concertante for violin and viola. An artistic collaboration was cemented, creating a beautiful friendship.”

Rinaldi will perform as soloist for the CT Virtuosi’s performance of selections from Concerti Grossi, Op. 6, by the Italian Baroque composer Arcangelo Corelli. “Corelli is an undisputed master of the Italian musical art, and a model for most European composers [after him]. The collection of Op. 6 concerti is among the most important and popular compositions by Corelli, for the brilliance and lyricism entrusted to the violin part” Rinaldi says.

Concert Admission:
All Virtuosi Concerts admission is by Suggested Donation ticketing policy. You can purchase tickets on-line at www.thevirtuosi.ticketleap.com, or you can make a donation at the box office at the concert site.