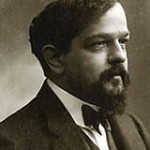 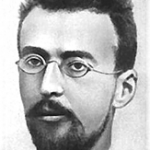 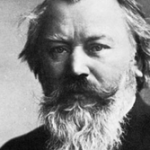 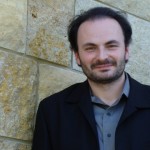 Claude Debussy was born in 1862 in St. Germain-en-Laye, near Paris, France. His father was a salesman and kept a china shop. His mother was a seamstress. Some traumatizing events in his childhood caused him a depression and he never spoke about his early years. Later he could not compose without having his favorite porcelain frog. Debussy’s piano teacher, Mme. Maute, had been a student of Frédéric Chopin. She sent Debussy to the Paris Conservatory, where he studied from 1872-84 with ‘Cesar Franck’, Ernest Guiraud and others. He lived at the castle of Nadezhda von Meck and taught her children. She was a wealthy patroness of Pyotr Ilyich Tchaikovsky, and eventually Debussy played all pieces by Tchaikovsky in addition to other classical repertoire. She also took Debussy on trips to Venice, Vienna and Moscow. In Vienna he heard “Tristan und Isolde” by Richard Wagner and admitted his influence for a number of years. Debussy won Prix de Rome twice in 1883 and in 1884, which covered his studies at the Villa de Medici in Rome for the next four years. In Rome Debussy met Franz Liszt and Giuseppe Verdi and heard music of Richard Wagner, which made a strong impression on Debussy. In 1888 and 1889 he went to listen to more music of Richard Wagner at the Bayreuth Festspiehaus. There he was very impressed by “Parsifal” and other works by Wagner. He used the Wagnerian chromaticism for upgrades to his own tonal harmony in “Cinq poems de Baudelaire” (1889). Debussy became influenced by the impressionist poets and artists in the circle of Stephane Mallarme. In 1890 he wrote his most famous music collection for piano, “Suite bergamasque”, containing “Clair de Lune”. His “Prelude to the Afternoon of a Faun” (1892) continued the most productive 20-year period in his life. He composed orchestral “Nocturnes”, “La Mer”, “Images” (1899-1909), and the intricate ballet “Jeux” (1912) for “Ballets Russes” of Sergei Diaghilev. He was fascinated with Maurice Maeterlinck’s play “Pelleas et Melisande”, which inspired him to compose the eponymous symbolist opera which was praised by Paul Dukas and Maurice Ravel. In 1908 Debussy married singer Emma Bardac after they had a daughter, Claude-Emma. Debussy called her Chou-Chou and composed for her the collection of piano pieces “Children’s Corner Suite” (1909). His piano masterpiece “Preludes” were composed in 1910-1913. The twelve preludes of the first book are alluding to Frédéric Chopin, with more provocative harmonies, especially the “La Cathedrale Engloutie”. In the second book of twelve preludes Debussy explored avant-garde, with deliciously dissonant harmonies and mysterious images. The beginning of WW I and the onset of cancer depressed Debussy. He left unfinished opera, ballets and two pieces after stories by Edgar Allan Poe, that later were completed by his assistants. He died on March 25, 1918, in Paris. 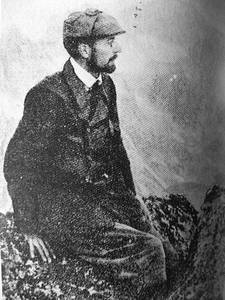 Mieczysław Karłowicz was the first Polish composer who forged progressive models of expression which could bear comparison with those employed by the leading representatives of the contemporary European mainstream. Karłowicz spent his childhood on his family estate in Wiszniewo, Lithuania. In 1882, when he was six, the property was sold and the family moved first to Heidelberg, then, in 1885, to Prague, and a year later to Dresden, to finally settle down in Warsaw in 1887. When in Heidelberg and Dresden, Karłowicz went to schools providing general education. In Warsaw he attended Wojciech Górski’s Real School. Brought up in a music-loving environment from early childhood, Karłowicz was introduced to the operatic and symphonic works by Bizet, Weber, Brahms, Smetana and others when the family were living abroad. He started taking violin lessons at the age of seven, first in Dresden and Prague, then in Warsaw, where he was taught by Jan Jakowski. In 1889-95 he was a student of Stanisław Barcewicz. At the same time he learned harmony from Zygmunt Noskowski and Piotr Maszyński, and later took up counterpoint and musical forms with Gustaw Roguski. It was at that time that he started to compose. His first surviving work, a piano composition “Chant de mai”, dates from 1893-4. In 1893-4 Karłowicz also attended lectures at the Department of Nature, Warsaw University. In 1895 he left for Berlin with the intention of studying violin with Jozsef Joachim. Failing to get to Joachim’s class at the Hochschule fur Musik, he took private lessons from Florian Zajic. It was then that he decided to become a composer and enrolled as a student with Heinrich Urban, simultaneously attending lectures in the history of music, history of philosophy, psychology and physics at the University of Berlin. Indeed, most of Karłowicz’s twenty-two solo songs were composed between the end of 1895 and the end of 1896. When in Berlin, he was a musical correspondent for EMTA. The years spent studying with Henryk Urban produced a number of smaller pieces as well as music to “The White Dove”, a drama by Jozefat Nowiński. In the late 1890s Karłowicz got involved in the “Revival Symphony” project, which he completed on his own after he had graduated and returned to Warsaw in 1901. In 1903 he sat on the Board of the Warsaw Music Society, where he organised and ran a symphony orchestra. At that time Karłowicz devoted himself exclusively to one musical form, that of the symphonic poem. From 1904 to 1909 he composed six symphonic poems Opus 9-14. In 1906 he settled down in Zakopane, the resort in the Tatra Mountains with which he had felt a special affinity for years. He joined the Tatra Society, published accounts of hiking trips, and became a passionate mountaineer, skier and photographer. Indeed, he was one of the pioneers of climbing in the Tatra Mountains. Although Karłowicz composed only one symphony, and did so in his school days, his six symphonic poems secured him the position of Poland’s greatest symphonic composer. Other than that, his compositions are few and include the graceful “Serenade op. 2” for a string orchestra; the wonderful, virtuoso “Violin concerto op. 8 in A Major”; and charming youthful songs. What would Karłowicz’s output have looked like had he not been killed by an avalanche at the age of thirty three? It would obviously have been richer, although his symphonic achievement remains unsurpassed, anyway. While the compositions by Poland’s earlier composers, including Jakub Gołąbek, Antoni Milwid and Wojciech Dankowski in the eighteenth century, Józef Elsner and Karol Kurpiński in the first half of the nineteenth century, and finally Władysław Żeleński and Zygmunt Noskowski in the second half of the nineteenth century were but minor contributions to the history of European music, Karłowicz’s symphonic works elevated him to a top position in the neo-Romantic movement of the early twentieth century. more >>>