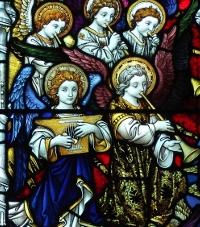 In 1816, when Symphony No.5 was written, Schubert was 19 years old. Of all of Schubert’s symphonies, it is scored for the smallest orchestra. In character, the writing is often said to resemble Mozart; Schubert was infatuated with the composer at the time he composed it, writing in his diary on June 13 of the year of composition, “O Mozart! immortal Mozart! what countless impressions of a brighter, better life hast thou stamped upon our souls!”

Gaude Mater Polonia (Rejoice, oh Mother Poland) was probably the most popular medieval Polish anthem, written in the 13th-14th century in memory of saint Stanisław Szczepanowski, bishop of Kraków. Polish knights used to sing it after victory in battle, presumably to one of the Gregorian melodies associated with O Salutaris Hostia, on which it is based.

The Anthem came to existence in 1253, along with the canonization of saint Stanisław Szczepanowski. It is assumed that the first performance of the piece took place on May 8, 1254, during the canonization ceremonies in Kraków, Poland.

The author of the anthem is the first – in music history – known by name Polish composer (and poet) – Vincent of Kielcz – a Dominican priest, Cracovian canon and chaplain of the bishop Ivon Odrowąż.

The anthem became a part of Polish tradition and its history, being sung on coronations of Polish Kings, royal marriages, as well as during celebrations of the victory of John III Sobieski under Vienna (1683). Kings and military commanders thanked for their successes by singing the anthem Gaude, mater Polonia. The melody has been popular for almost 750 years. It became a key element of the Polish Culture, sung after victories of the Polish Army.

The Mozart’s Coronation Mass (Mass No. 15 in C major, KV 317; sometimes Mass No. 16), composed in 1779, is one of the most popular of Wolfgang Amadeus Mozart’s 17 extant settings of the Ordinary of the Mass. This Mass was completed on March 23, 1779 in Salzburg. The mass was almost certainly premiered there on Easter Sunday April 4, 1779. It appears to have acquired the nickname “Coronation” at the Imperial court in Vienna in the early nineteenth century.